introduction
contents
1  the human spirit
2  spirit, soul and body
3  the initial mental state
4  the spiritual development
5  the spiritual reunion
6  the manifestations of deity
7  summary of spirituology

The human spirit is the living unit, the living independence. By descending into the body, the spirit connects itself with the opposite of itself, the matter that doesn't live. Because of that, the spirit cannot be itself here and, without knowing it, finds itself in a mental state of narrowed consciousness. That's why the spirit becomes unconscious of the existence of itself as being a spirit. That's is the cause that the spirit here unconsciously identifies itself with body and environment and therefore thinks ... this is all there is.
The arising of the state of unconscious identification is described by the following event: when you wake up you go from one room (the spiritual world) through a door to another room (the physical world) and when you arrive there you completely forgot that you were in that first room before. While being in that first room you have a good picture of both rooms and from there you can see that next room.
When you fall asleep, you go back to the first room through the same door, but you are not aware of both transitions across the border between the spiritual and material worlds.

3.1 The initial mental state: unconscious identification
The spiritual development towards self-realization and reunification begins from an opposite state, which is the initial state, the state of youth. This is a mental state of unconscious identification with this physical, temporary existence.
There is nothing in this physical existence that lets you become aware of yourself as being a spirit. By that unconsciousness of yourself, your attention and dedication are pulled out by the overwhelming sensory impressions that reach you from the outside world. As a result, your attention and dedication are pulled out in the outside world. You transfer yourself to the outside world, as it were - the self-transfer - without realizing this.
Unconsciously you identify yourself with your surroundings. Thus, notwithstanding you are the human spirit, you still feel one with this physical existence and therefore you think that the material world is the only thing there is.
back to Contents

3.2 Therefore the question: "Who am I actually?"
By this unconscious identification with what you yourself, as being the spirit, are not, values are reversed. Thereby the value of the physical is raised above the spiritual. As a result, you are most interested in the physical and temporal, while you ignore yourself as being a spirit, the essential and eternal ... without being aware of this situation!
By identifying with this physical existence, you also only see this existence and the spiritual reality remains hidden from you; but as a result you only see one half of reality - with all its consequences for your assessment of the meaning and value of this physical existence.
By identifying yourself with this physical existence you also have to believe that God and God's angels exist, because you can not know here for sure - except if it has been shown to you.
This unconscious identification with the physical, with what you yourself, as being a spirit, are not, is therefore the core question of yourself as being a human spirit. It is only because of this, that at a given moment you can ask yourself the question: "Who am I really?"
If by the recognizing of the activity of your own spiritual abilities inside yourself, you have recognized yourself as being a spirit - "I as being the spirit, am the one who thinks this thought within myself!" - than you have found the answer to that question!
back to Contents

"The body is the grave of the spirit." [for] "Spirit and body are stuck together, so the spirit must see the existing from a kind of prison, not face to face, and wanders around in complete ignorance."
Plato, Greek philosopher (427 - 347 B.C.)

3.4 Chained and driven
For example, if you see something with which you have pleasant experiences and which has to do with a certain habit of satisfying your needs - for example you see the cookie drum on the table to mention something innocent - then after the sensation of it, the image of immediate satisfaction comes to you.
At the same time, an emotion develops in the form of the desire to satisfy that need, which is followed by the urge to do so immediately; and before you are aware of it you've done a grasp in the drum.

In this initial mental state, the abilities can be in a state of more or less uncontrolled activity, in which you are fascinated by sensations and perceptions, and are driven by emotions and impulses. This is in contrast to the state of controlled activity, in which you consciously and intelligently observe things, think about them and feel them through, and then deliberately decide to do something with them.
So it is always about the four abilities, only the way in which they are expressed in your behavior - and therefore in your personality - is different, namely: controlled or uncontrolled.
back to Contents

In the attached metal state, the activity of your abilities is primarily directed at yourself. This self-centeredness, this desire to put oneself in the centre of attention, is selfishness. As a result of selfishness you not only close yourself off to your fellow human beings, but to the same degree also for your divine, spiritual origin.
back to Contents

3.7 The one-sided identification
The unconscious identification and attachment are more outwardly directed. But within yourself, a one-sided development of one of your abilities can arise from your personality building, with which you also can identify yourself. This causes the one-sided identification.
Because the opposite ability then remains more or less undeveloped (thinking is the opposite of feeling, wanting to perceive), a one-sidedness arises in your personality. This one-sidedness is the cause of imbalances in your personality and of poor adaptation in those areas of existence that have to do with the undeveloped ability.
By one-sidedness of your perception you are directed on gaining pleasant experiences; but as a result, your willpower can remain undeveloped, making you easy-going, seductive;
by one-sidedness of thinking you are characterized by professionalism and rationality; but because feeling has remained undeveloped you can, in dealing with your fellow human beings, behave insensitive;
by one-sidedness of feeling you are correctly adjusted to a personal feeling bond with your fellow human beings; but because you miss the inner certainty of thinking you can become dependent on them;
and by one-sidedness of willpower you are directed to act and to enterprise; but because of that you can lack the sense fot the reality of perception, making you short-sighted.
back to Contents

3.8 The separateness of the origin
By this initial mental state of unconscious identification with what you are not and by the associated attachments and one-sidedness, man is not himself according to his original, spiritual nature. In this initial state you can use the spiritual abilities in an uncontrolled, selfish and one-sided way, which is reflected in your behavior. This is the cause of the disturbance of the bond with our fellow men and of all the senseless suffering that we do to each other and ourselves.
It is also because of this initial mental state that your striving for spiritual development can be inhibited and the separation of your spiritual origin remains.
back to Contents

3.9 Odin as an example of the initial state and mental growth
In this material world the human spirit has become unconscious of its own existence, because the spirit as being the living must here connect itself with matter as the non-living, whereby the spirit can not be itself anymore.
In that condition the human spirit stands nevertheless for the special task of becoming aware of its own existence. Only by taking up itself as a work by developing oneself spiritually, the human spirit is able to become itself, in the inhibitory circumstances of this temporary existence.
These restraining, stressful circumstances just are here to give the human spirit the opportunity, by overcoming those oppositions, to become more powerful and aware of itself, by becoming aware of its own inner activity.
This inner, spiritual struggle is described in the Edda, the Old Norwegian sagas book, by Odin (Wodan) himself. Odin has come out of his deepest depths himself by spiritual development - for which he discovered the rune stones here, the alphabet that leads to spiritual insight, to become - by his own power - independent as a person on its own.
The inhibiting conditions in this existence are represented by the image of Odin, bound to the world tree Yggdrasil. 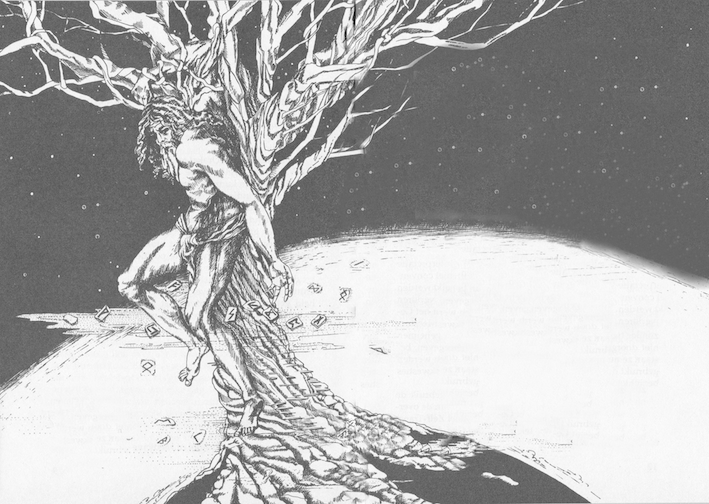 The speech of the Exalted

I know I was hanging
on the wind-stricken tree,
nine long nights,
wounded by my own spear,
dedicated to Odin,
sacrificing myself to myself;
tied to the tree,
of which nobody knows,
the roots from which it grows.

Nobody gave me bread,
nobody gave me water;
I looked down into the deepest depths,
where I discovered the Runes;
with a loud cry I grabbed them,
after which I fell dizzy and fainting.

While doing
I won to wisdom;
word for word
I was led to the floor,
from deed to deed.

Yggdrasil is the name of the 'World Tree' [the evergreen Taxus] in the Nordic cosmogony. The name can literally be translated as 'horse of Yggr', or 'horse of Odin', and refers to the fierce vitality that carries him and leads him everywhere. [...]

Yggdrasil is the tree of life and tree of knowledge, the symbol of the endlessly branched form of that which is. At the same time he carries and connects the worlds as a world axis (axis mundi). At the same time, it shows the way to the higher, the way that the shaman follows to get into the realm of spirits and gods. He reaches from the underworld through the human world to the world of heroes and gods.
Source: Wikipedia

to part 4: the spiritual development

Translation by Google Translate and DeepL