introduction
contents
1  the human spirit
2  spirit, soul and body
3  the initial mental state
4  the spiritual development
5  the spiritual reunion
6  the manifestations of deity
7  summary of spirituology


The symbol of the universal spirit spark 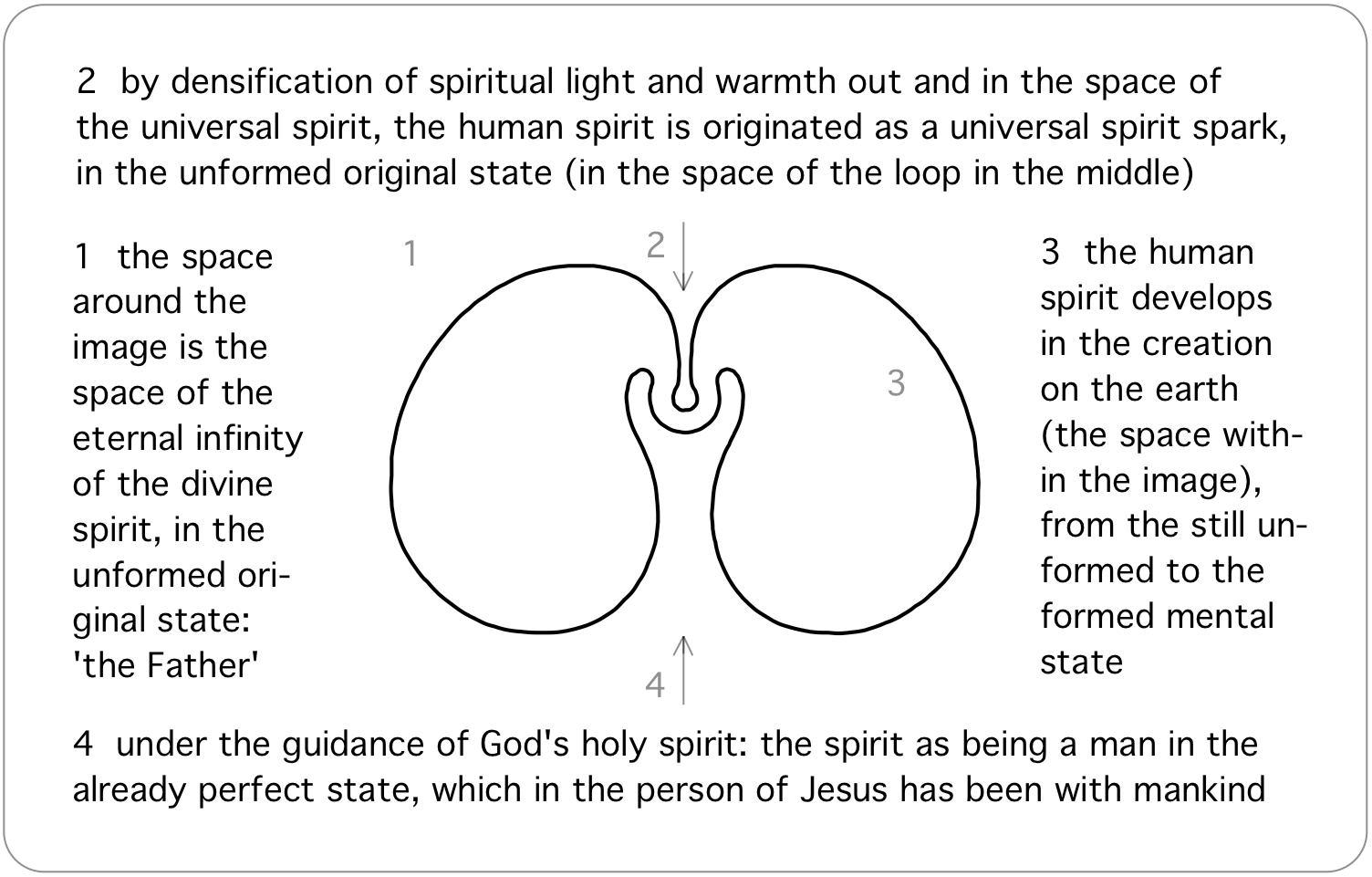 Don't fear, for I am with you, don't be afraid, for I am your God.
I make you strong and help you, and support you with the wholesome power
from my right hand. (Isaiah 41:10)
By the reunification the state of mind is reached that Jesus describes in his address to his disciples during the Last Supper (John 13-17):
Jesus replied: "Don't you believe that I am in the Father and that the Father is in me? I don't speak on my own behalf when I speak to you, but the Father who remains in me does his work through me. Belief me, I am in the Father and the Father is in me." (John 14: 10-11) [...] "Then you will understand that I am in my Father, that you are in me and that I am in you." (John 14:20)
"When a man loves me, he will abide by what I say, my Father will love him, and my Father and I will come to him and live with him." (John 14:23)
"Let them all be one, Father, as you are in me and I in you, let them also be in us ... I have made them share in the greatness you have given me, that they may be one like us: I in them and you in me, then they will be completely one and the world will understand that you sent me and that you loved them as you loved me." (John 17: 21-22)

The state of the spiritual union of mankind with God's holy spirit as described by Jesus during the Last Supper, corresponds to the 'mystical body of Christ' of the apostle Paul (Romans 12:4-5, 1 Cor 12:20-27, Eph 4:10-13, 5:29-32, Col. 1:23-24) and with the characteristics of the unified humanity such as the theologian and palaeontologist Pierre Teilhard de Chardin describes as the Omega point.

Transformation and reunification
The transformation takes place freely and by its own power in and through the human spirit, the droplet form in the heart of the symbol, thereby unnoticedly supported and encouraged by God's holy spirit under it in the form of God's hand.
In the space of creation God's holy spirit and the human spirit can meet each other as spiritual independences. 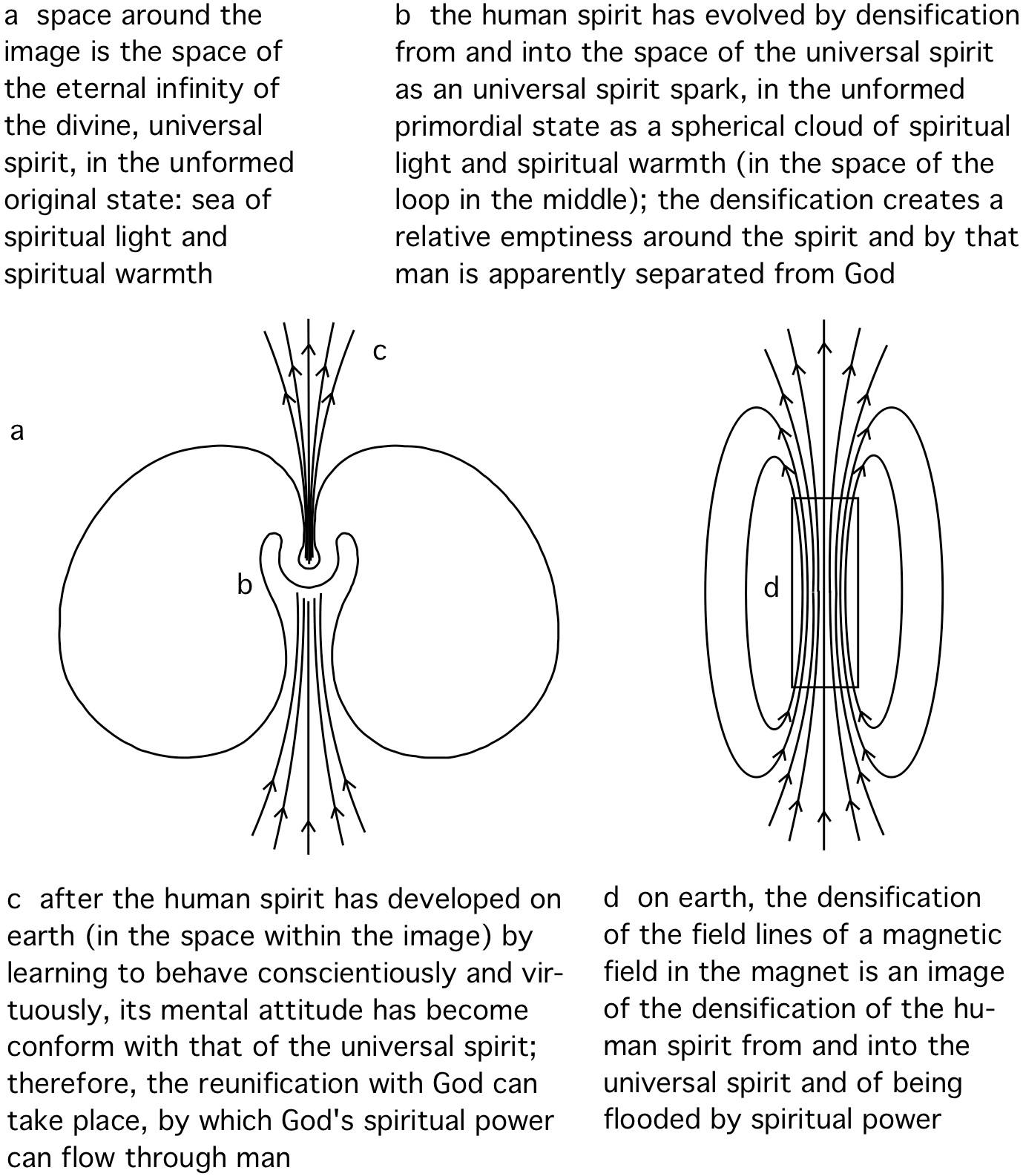 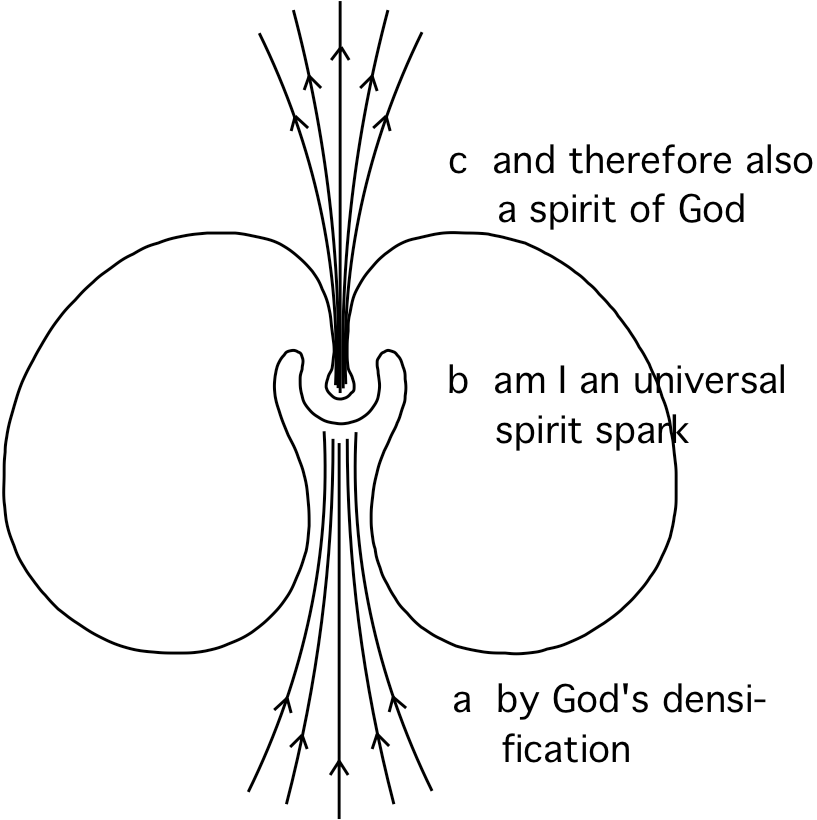 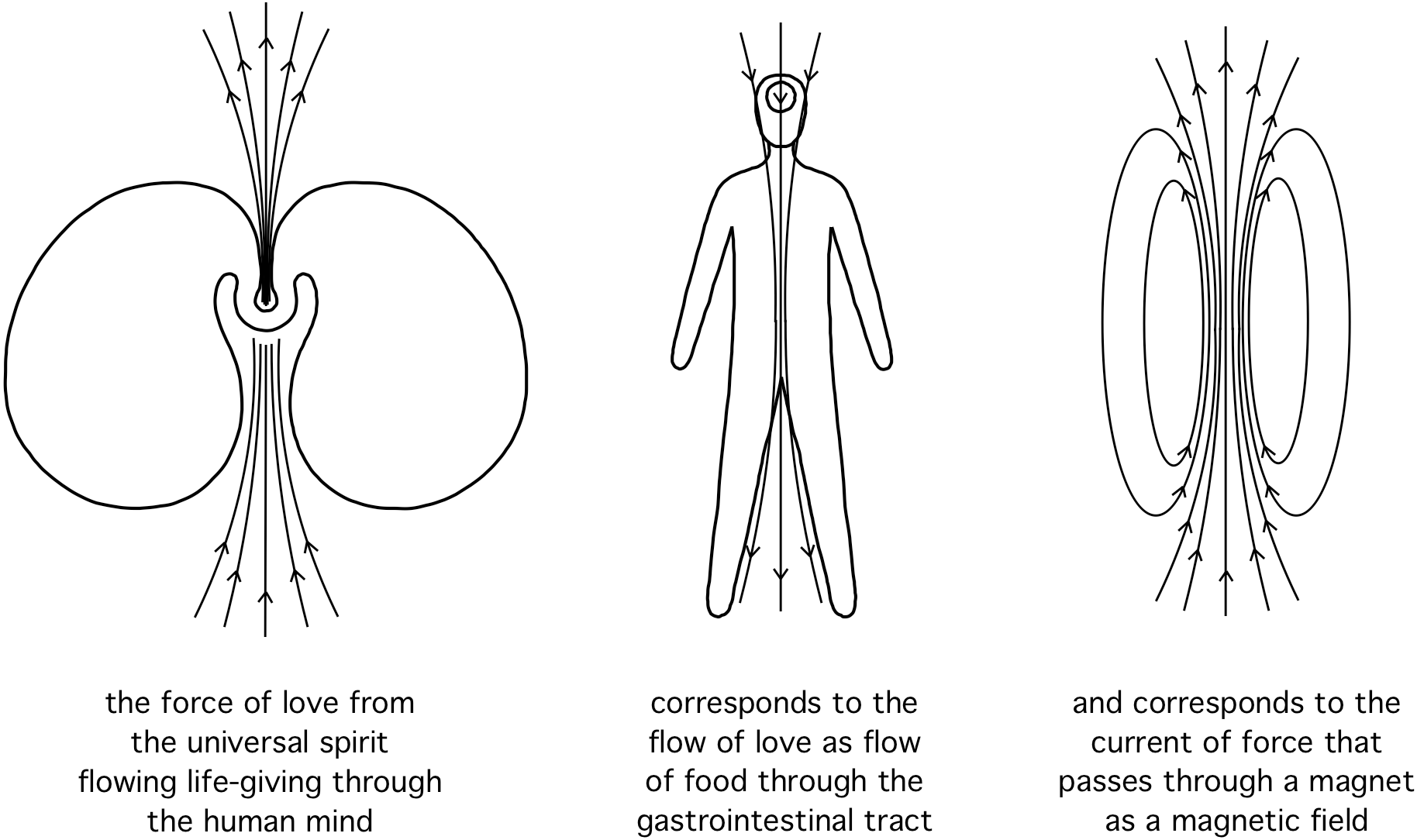 The magnet as an expression of the spirit
In 1600, the English physician and natural philosopher William Gilbert (1544-1603) described his research into the magnetic properties of the stone magnetite in his work De Magnete. He was the first to distinguish the attraction by magnetite (magnetic attraction) and amber (electrical attraction) from each other.
He scattered iron filings on paper around a magnetite rod, making him discover the magnetic 'field' (it seems to be a 'field' but in fact it is a space) around a magnet. He called this phenomenon the 'aura' (Latin for: 'radiance', 'shine') of the magnet and believed that it should be of divine origin.
This corresponds to the following. The human spirit is a spherical cloud of spiritual light and warmth, with which its spiritual abilities - perception, thinking, feeling and wanting - are related. When the spirit becomes active within itself with its abilities, it radiates a space of light around it, the 'aura' or 'soul', of which the spirit is the heart or core and the source, and in which the spirit dwells (the original meaning of 'soul' is: 'room', halle, dwelling). At first his radiance was also spherical, but by mental development part of it has assumed the form of the spirit form, the human figure.
William Gilbert had therefore seen it well ... the magnetic field as an aura of the magnet corresponds to the soul (the aura) of the active spirit.

The word 'field', introduced by Faraday, is a misleading word, because there is no question of a 'field'. It is a homogeneous 'power space' around the magnet, the force of which gradually decreases with increasing distance from the magnet. That power space has the shape of a 'torus'. This Latin word means 'footring of a pillar' and comes from the Greek word 'toros': 'includer'; in mathematics it is called a 'ring surface'.

The torus or ring surface
The aura or the radiance of the human spirit has the form of a torus. The channel in the middle of the aura as a torus is the place where the universal spirit, the accompanying spirit and the human spirit come together. That is the 'heart' where unification can take place if the human spirit succeeds in directing attention and dedication to the center of itself.
In Indian literature, the channel in the middle corresponds to 'the stick of Brahman', the 'Brahmadanda' or to the channel 'sushumna' with which the seven chakras are connected. The chakra above, Sahasrara chakra or the crown chakra, is the 'gate of Brahman', the divine, universal spirit. 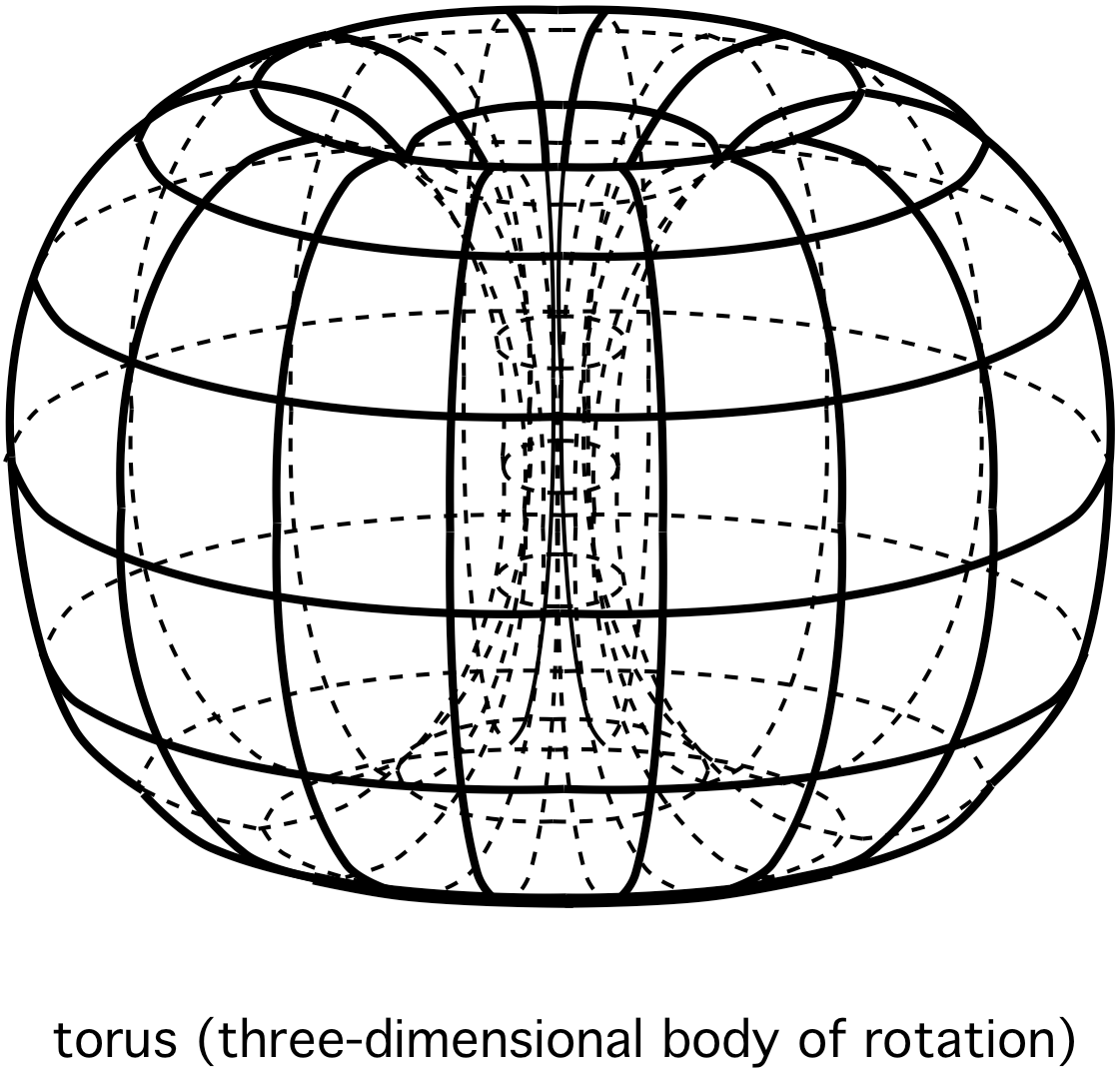 (The magnetic field of the earth has a matching shape.)
Through that channel the spirit power of the universal spirit can flow back and forth as the human spirit opens itself up to the divine spirit: the reunification.
A corresponding connection takes place while connecting with God's holy spirit or spiritual counselors, when the human spirit opens up out of love for their effect. 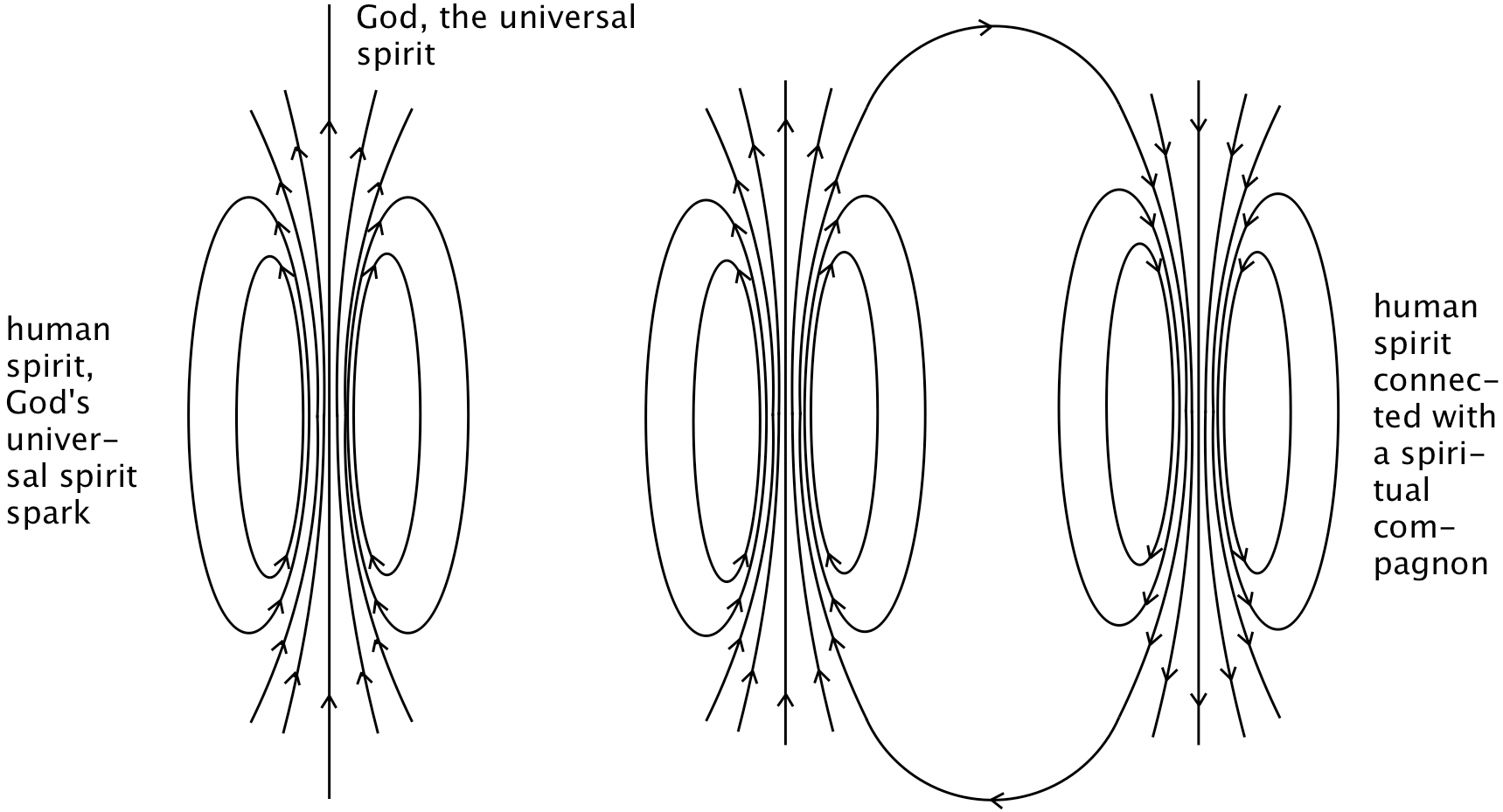 Their lines of force therefore pass through mankind. In this way man is included in the appearance of spiritual counselors. The human spirit is absorbed into a collective cycle of spirit power.
The course of the lines of force in magnets in the physical world is a representation of what happens to spirits.
Click here for a text from the book 'Earth and Moon' by Jakob Lorber that deals with the spiritual meaning of the magnetic field.

Lovingly I am thought
by God's spirit
as being a spirit,
lovingly I am flooded
with God's force of life.


Translation by Google Translate and DeepL